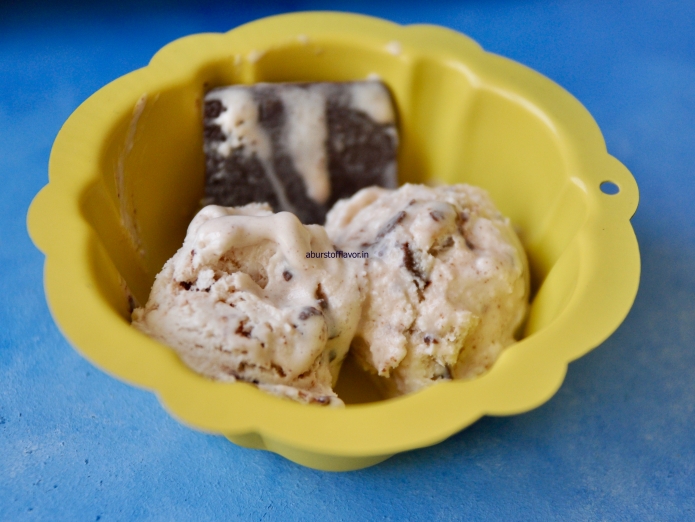 DH is a huge fan of ‘After Eight’ thin Mints – those incredibly thin wafers of dark chocolate, encasing zesty and sweet peppermint inside. They’re just the right size, right thickness, and right amount of sweetness from the mint filling to balance the bitterness of the dark chocolate. If there ever was a chocolate made in heaven, it has to be this! My sister recently travelled to Japan, and happened to pick up a huge box of After Eight thin mints at the duty free shop on her way back to India 😀 Naturally, we spent the last one month relishing the mints after dinner everyday. Since I make ice creams in summer pretty frequently, my sister suggested that I try turning this beloved sweet treat into an ice cream. It was like someone had switched on a light inside my head. Why didn’t this ever occur to me?? 😀

This ice-cream will WOW you if you love the combination of dark chocolate and peppermint. This can be made extremely chocolatey by adding melted chocolate to the ice cream. I chose to keep the ice cream base as plain cream/vanilla, because my sister wanted a marbled ‘cookies and cream’ kind of effect. Personally, I think I prefer the chocolatey version(which I will put up soon). Either way, this is delicious! To top everything, this is eggless, does not involve any churning whatsoever, and does not require any machines to make this. You will get velvety soft, rich and creamy ice cream if you just follow the instructions. Read on for the recipe!

‘Karukk morukk’ is how we Tamilians describe the sound that you will hear when you bite into these crispy, crunchy, deep fried and flavourful morsels of onion pakoda coated in […]
Onion Pakoda/Pakora – Step by Step

I’ve been on a health kick lately. Nothing drastic, but just trying to eat clean and eat fresh as much as possible. This is something I drink every other day, so […]
ABC (Apple, Beet, Carrot) Juice

How to make Idli & Dosai Batter: Step by Step

Idli/Dosai batter is something I learnt how to make very […]
How to make Idli & Dosai Batter: Step by Step

‘Thogaiyal’ is the Tamil word for a condiment that is generally thicker in consistency than a chutney, and made with lentils and coconut as base ingredients. Several other spices are […]
Paruppu Thogaiyal: Step by Step